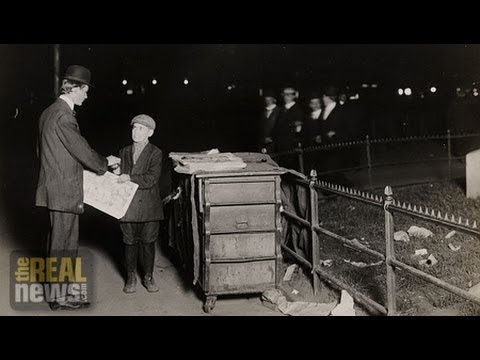 How to Use Economics & Not Be Used by Economists – Ha-Joon Chang discusses “Economics: The User’s Guide” 3/6

You cannot discuss economics without discussing politics; there are always ethical and political judgments you are making when you are doing this supposedly technical, scientific analysis says Ha-Joon Chang who goes on to explain neoclassical economists try to tell you that there’s no politics in what they are doing.

Lynn Fries is no longer associated with The Real News Network.

This is Part 3 of a six-part series with economist Ha-Joon Chang. We’re exploring thoughts from his book Economics: The User’s Guide, where he explains that there’s no such thing as scientific, value-free analysis in economics. In this segment we’re continuing our look into how economic theory has a lot of political assumptions. Our guest, Ha-Joon Chang, joins us from the UK where he teaches economics at the University of Cambridge. Economics: The User’s Guide is his latest book. Earlier books include Kicking Away the Ladder, and 23 Things They Don’t Tell You About Capitalism.

FRIES: In Part 2 we were talking about political assumptions and economic theory and you had said there are two different types, one explicit and another hidden. And that trickle-down economics was an example of an explicit type. For viewers who missed Part 2, we’re using examples from Neoclassical economists because most other schools are quite open about their political assumptions.

So talk now about the other type. Give us an example of a political assumption that’s hidden.

CHANG: So in trying to make what they do a science, Neoclassical economists have adopted this ethical criteria called the Pareto principle. Now, Pareto principle, what it says is that you cannot call a social change an improvement if it hurts even one person. Now, this is an important attempt to defend individuals against the tyranny of the majority, because if you begin to say, well you know, you can override minorities, where do you stop? I mean, before you know it you’re in the same bed as Hitler and Stalin. So you know, the Pareto principle is quite an important principle.

But it still is a political principle. Because it assumes that the existing distribution of income, wealth, and power is a legitimate one and it, more importantly, assumes that you cannot disturb that status quo. So go to the other extreme and imagine a case where one dictator or one small group of elite own, I don’t know, 50%, 70% of national income. In that kind of society you might say, well, if these people give up 5% of what they have, we can eradicate extreme poverty. Well, according to the Pareto principle you cannot do that kind of thing because it will make those that are a minority worse off.

So I mean, I’m not saying that this is an easy decision to make. I mean, taken to the extreme any ethical principle becomes a monster. That’s my general view. So I’m not saying that the Pareto principle is necessarily right or wrong, but you have to realize that it has a particular political bias towards the status quo. And in that sense economics can never become a science because there’s always this ethical and political judgment that you are making when you are doing this apparently, you know, technical, scientific analysis.

FRIES: And even Paul Krugman made some comments on low wages that reflect this.

CHANG: Yes. It’s a very interesting example because I, I’m told that he has slightly modified his position on this. But you know, in the late 1990s he had a debate with some American NGO activists campaigning to condemn low, low-wage jobs created by American companies in poor countries like Bangladesh. And Paul Krugman pointed out, look, you guys are misguided because you are talking as if these low-wage workers have a choice between a low-wage job and a high-wage job. But actually the choice they face is between a low-wage job and no job. And given that no job is always less preferable to a low-wage job, you cannot criticize American companies for creating that kind of jobs.

Now, you might say that these are all pipe dreams, but what I just told you is what happened in my own native South Korea in the 1960s and ’70s. During those days South Korea was one of the poorer countries in the world, and we had a lot of low-wage jobs. But this is what actually happened. So when you look at things in the Neoclassical way, accepting that the existing distribution of land should stay as it is, that child labor should be accepted because that’s the reality, governments shouldn’t intervene because industrial policy is bad. Yeah, then of course there’s no other option.

So when you accept the status quo too much, you are actually hugely restricting the kind of policy alternatives that you could be deploying, and that is the unfortunate bias that Neoclassical economics has.

FRIES: So speak more broadly about these hidden politics in Neoclassical theory.

But that project is an illusion, because the markets themselves are actually political constructs. Neoclassical economists believe that the markets just spontaneously emerged out of some kind of natural process. But they are not. I mean, they are deliberately constructed based upon certain ethical and political decisions.

The best example is child labor. You know, 200 years ago when you tried to regulate child labor a lot of people were up in arms saying, well, this is going to undermine the very foundation of a free market economy. They need a freedom of contract. You know, these children want to work, these people want to employ them, what is your problem? You know, it’s not like these employers kidnapped the children and used them as slave laborers. So 200 years ago, a lot of respectable people, you know, economists and factory owners, parliamentarians, they argued that child labor should be allowed. Not just allowed, I mean, it’s that essential in maintaining the freedom of the contract, which is the foundation of the free market economy.

Fast forward 200 years, you know, I haven’t met a free market economist who openly says that we need to bring back child labor in order to make our labor market truly free. Well, actually, there’s one person who kind of did that, Newt Gingrich, who said famously, or infamously, in the 2012 U.S. presidential election campaign that he believes that poor children should work as janitors in schools. You know, I mean, that is the only example I know.

Now, why do people accept that children shouldn’t work is not because some economic theory has changed, some scientific fact has changed. It’s because their ethical and political views have changed. Now people believe that the right of the children to have a childhood and an education should have priority over the right of employers to hire whoever they like. It should–those rights of children should have a priority over the freedom of contract. Once you make that ethical and political shift of viewpoint, child labor is not not even an issue. I mean, it’s simply something that you just don’t do.

Now, there are many examples like that. You know, 30 years ago, 40 years ago, environmentalists were considered to be crypto-Communists because they were out to destroy capitalism. You know, today, environmental regulation is mainstream regulation. Of course some people want to do more, some people want to do less. But no one says that environmental regulation itself is unacceptable. Once again, I mean, this change has come about as a result of a political and ethical shift, not because of a change in the economic theory.

So all these examples show that actually what is the market, where the boundary of the market lies and what is a legitimate object of transaction and so on is a political decision, and when the very foundation of our market is political like that, you cannot discuss economics without discussing politics. I mean, there are some analyses might have more explicit political assumptions than others, but it is impossible for any economic analysis not to have any political assumptions.

FRIES: We should talk more about the many different types of economic analysis. Let’s take that up in the next segment. Please join us for Part 4 of our conversation with Ha-Joon Chang. Ha-Joon Chang, thank you.

FRIES: And thank you for joining us on The Real News Network.

Ha-Joon Chang, a Korean native, has taught at the Faculty of Economics, University of Cambridge, since 1990. He has worked as a consultant for numerous international organizations, including various UN agencies, the World Bank, and the Asian Development Bank. A best selling author, his latest book is Economics: the User’s Guide. He has published 11 other books, including Kicking Away the Ladder, winner of the 2003 Myrdal Prize. In 2005, Ha-Joon Chang was awarded the 2005 Leontief Prize for Advancing the Frontiers of Economic Thought