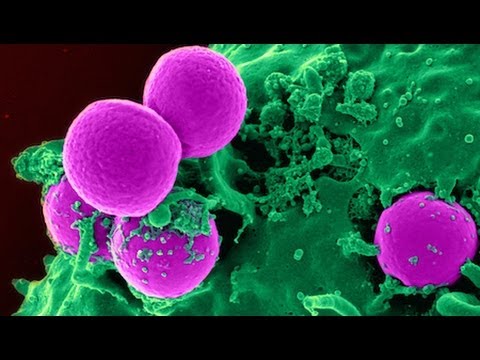 Antibiotics Are Becoming Ineffective All Over the World, Why? – Martin Khor

This crisis is as serious to human life as the climate change crisis that we are all trying to address and fighting against says Martin Khor, executive director of South Centre, in discussing the issue of anti-microbial resistance as a major threat to global security.

Lynn Fries is no longer associated with The Real News Network.

The World Health Organization will host its 67th Assembly here in Geneva this May. On the agenda will be the issue of antibacterial resistance. The WHO has issued a warning that microbial resistance is now happening in every region of the world and can affect anyone in any country.

The Real News invited Martin Khor to talk to us about this. Martin Khor is executive director of the South Centre, an intergovernmental think tank advising over 50 nations in the Global South.

Martin, thank you for joining us, and welcome.

FRIES: I was going to start by asking you how great a priority you at the South Centre were placing on this issue of antibacterial resistance. Then I read your op-ed in which you quoted what the WHO official who coordinates research into what they call microbial resistance was saying. Quote,

“A post-antibiotic era–in which common infections and minor injuries can kill–far from being an apocalyptic fantasy, is instead a very real possibility for the 21st century.”

“Without urgent, coordinated action by many stakeholders, the world is headed for a post-antibiotic era, in which common infections and minor injuries which have been treatable for decades can once again kill.”

So this is very serious.

KHOR: To put it mildly, I would say that this crisis is as serious to human life as the climate change crisis that we are all trying to address and fighting against.

So this is one of the top two or three crises, I think, you know, because my organization deals with all kinds of crises, but I would rate this as one of the most immediate crises, which, if we don’t solve soon, it will really get out of hand and millions and millions of lives, including lives of people in our own families, will be affected.

FRIES: According to the WHO report, we need to change the way we produce, prescribe, and use antibiotics. Give us an example.

A few years ago, the European Commission imposed a ban on the use of antibiotics as growth promoters in animals.

One problem has been that the Food and Drug Administration in the United States, you know, did not introduce the kind of ban that the European Union did. But last December, they did have a major step forward by introducing a voluntary code to encourage, you know, farms not to use antibiotics, or to phase out antibiotics from animal feed. But in any case, the United States is now beginning to act, and that is a very important step forward, because 80 percent of the medicines and the antibiotics that are sold in the United States goes towards animals rather than for health care of human beings. So if this huge market and this huge country begins to take action, it will also encourage developing countries to also take similar action, because in developing countries we don’t have regulations, we don’t have enough guidelines on the use of antibiotics, whether in hospitals, in the home, or in the clinics. And especially we don’t have regulations for the use of antibiotics in farms, and also in aquaculture, in the aquaculture industry.

FRIES: And this WHO report is also saying that significant action needs to be taken to prevent infections from occurring in the first place. So give us an example of that.

KHOR: Another thing that we need to do is to ensure that in the hospitals, care is taken in terms of the procedures, for example hygiene; in terms of the equipment, that the equipment should not be contaminated, including air conditioners and so on; in surgeries where operations take place, where infections can take place. If we can cut out infections in hospitals by bacteria that are resistant to drugs, then this will be a very major step forward, because 5-10 percent of patients who enter a hospital contract infectious diseases that they did not have when they entered the hospitals. You know. And this is in the developed countries. In developing countries, the situation may even be worse.

FRIES: So in the past when antibiotics stopped working because the bugs got smart and resisted them, we’d just get a different prescription for a new antibiotic. But the U.K. chief medical officer, Dame Sally Davies, in public lectures warned that while we have a good drug pipeline of new discoveries to treat conditions like diabetes and high cholesterol, we don’t have discoveries of new antibiotics. And it should be no surprise, because those drugs are prescribed for daily dosage, and over the lifetime of a patient, and are much more profitable, that pharmaceutical companies put their research into what makes money. So talk to us from a broader perspective of public health: what’s needed in research and development?

In addition to all this, I think we need to deepen our scientific knowledge and research on the dynamics of how resistance develops and how resistance accelerates. For example, recently it was discovered that there is an enzyme known as NDM1 whose special characteristic is to accelerate resistance to antibiotics. And this enzyme was discovered in relation to two types of diseases. But apparently this has now spread to more than ten types of diseases. So you have a gene, in this enzyme, which is an antibiotic resistance gene whose specialty is to strengthen the bacteria so that it will be resistant to antibiotics. And this gene can jump from one type of bacteria to another type of bacteria. And then, when it jumps to another kind of bacteria, then that new bacteria for another disease will develop the resistance. And soon we will have a new rate of resistance, through which the bacteria will win the race against the antibiotic. And if we don’t have new antibiotics, then the germs are going to win this race within a few decades.

FRIES: Given the WHO has issued a warning of the need for urgent and coordinated action–otherwise the world is headed for a post-antibiotic era–how do you explain the lack of awareness of the problem and a lack of action to contain it?

KHOR: I think medical people in the know already have been aware of this crisis for some time and have been warning. What has been lacking is leadership by well-known people who are in authority, a lack of leadership in our international health system. And I’m glad that the World Health Organization itself is now rising to the challenge. We’ll see what happens at the World Health Assembly.

One reason why governments have been reluctant to act, I think, is because of the power of the pharmaceutical/drug industry. This industry has been overselling, wrongly prescribing, wrongly advertising their medicines. This is something that we have tracked for the last 20-30 years. And I’m glad that now some governments are disciplining these companies. For example, in China this is very well known: last year a very famous British drug company was investigated in China, and some of the officials have been arrested for bribing doctors in China to prescribe medicines wrongly, including giving them monetary incentives, holidays abroad, and so on. So this company is now thinking of changing the way in which it is selling its product.

But that’s not enough; to have one company having a voluntary code of conduct for its sales promotion is not enough. We really need to regulate the whole industry. We also need to regulate doctors. And, of course, we need the patient to be more aware.

Now, all these things require huge publicity, as well as actions by developing countries. When I ask some of the international health personnel why the action plans that were drawn up ten years ago have not been implemented. They said it’s very simple: we have the plans, we want to act, but we don’t have the financial resources, we don’t have the financial resources to be able to help the developing countries to take actions. So the problem has festered for many decades until it has reached this crisis/boiling point.

And I think time to act is now. And it’s not just an action plan that has to be put in place, but an implementation plan backed up by money, to help developing countries to regulate, and to also get the money to discover new medicines that can be made available for all people in the world. It shouldn’t be medicines that are made available in very expensive doses which only the rich can afford.

So the way to do this is for a fund to be set up for research and development into new medicines. I don’t think we need much money, perhaps $2 billion, $5 billion to discover three or five new products. And $3-5 billion to discover new antibiotics which can be used by everybody in the world is certainly a top priority that we should be fighting for.

KHOR: Thank you very much.

FRIES: And thank you for joining us on The Real News Network.

Martin Khor is the Executive Director of the South Centre, which is a Geneva based inter-governmental think tank of and for developing countries.