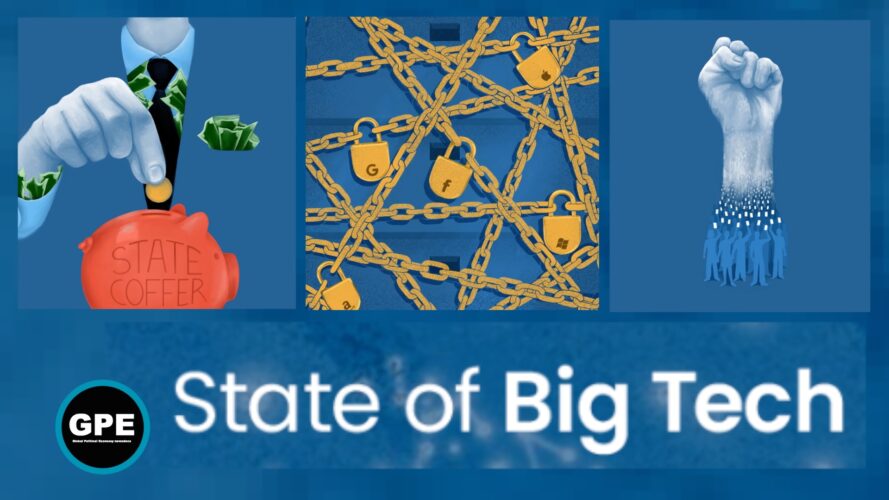 From fintech to food systems and social media to all domains essential for society and the economy, the State of Big Tech compendium of fifteen essays offers a vision and blueprint for the 99% to break out of privatized status-quoist enclosures.

Capitalism in the Age of Intellectual Monopoly authored by Cecilia Rikap and Cedric Durand, Centering Society in Big Tech Reform by Richard Hill, Rigging the Rules: How Big Tech Uses Stealth “Trade” Agreements and How We Can Stop Them by Deborah James, When Big Tech Came for the Farm: A Blueprint of Resistance from Asia’s Small Farmers by GRAIN.

Those are a sampling of essays that are part of a compendium of fifteen essays published in the 2022 edition of the State of Big Tech.

The State of Big Tech is a research project at IT for Change. It is supported by the Fair, Green and Global Alliance. This is an eight member alliance that aims to power voices of peoples and communities all over the world and that is collaborating with over a thousand partner organisations in countries where people and nature are under constant pressure.

Under the theme of ‘Dismantling Digital Enclosures’ and at the invitation of IT for Change, scholars and activists alike representing a broad spectrum of fields and experience have contributed to this   inaugural edition of the State of Big Tech.

As stated by IT for Change: “The essays break down various phenomenon such as the creeping onslaught of edtech into public education, the digital capture of food systems; Big Tech’s attempts to monopolize research and corner innovation networks, to their Trojan-Horse proposals for instituting their power in multilateral spaces, to the questions raised by Web 3.0. But going beyond detailing the problem statement, our contributors also capture attempts at popular mobilization, and bold visions for alternative digital futures that attempt to break out of the privatized status-quoist enclosures.”

Today’s video short will feature clips of three of these contributors talking about their respective essays. Those essays include: Milford Bateman’s The Investor-Driven Fintech Model and Its Discontents, Michael Kwet’s Building a Socialist Social Media Commons and Sofia Monsalve Suárez and Philip Seufert’s The Big Tech Takeover of Food Systems in Latin America: Elements for a Human Rights-based alternative. We go now to our featured clips.

MILFORD BATEMAN, visiting professor of economics at Juraj Dobrila University at Pula in Croatia:  My interest in preparing the chapter in this book is FINTECH, short for financial technology. It’s something that is being widely celebrated across the world but particularly in the Global South. Because many see it as a way that will bring development to local communities and facilitate poverty reduction and many other benefits.

The evidence so far is that there are some benefits for communities in terms of easier access to credit, easier access to savings , better access to remittance, cheaper payments. But when you start to look into the long term and how these trends develop, you actually see that there are many downside appearing, And they are now at risk of swamping any of the initial upsides to FINTECH.

So that’s what I tried to look at. It is still research at an early stage. But it certainly is very worrying that so many of the initial upsides are now being completely obliterated by these downsides. And that FINTECH is now turning into a new way of extracting value from the Global South along the lines of the old colonial project.

And so I have documented some issues of that and other disbenefits I can find. And at the end of the chapter I point to a new type of model, a people-centered FINTECH model. Which is about local communities using FINTECH platforms as a way of directly benefiting the community. And not having to interact with Big Tech or international investors but doing it themselves. And promoting FINTECH and adopting and adapting FINTECH in ways that help local communities in the Global South.

MICHAEL KWET, visiting fellow Yale Information Society P roject: Today I am going to be discussing an article I wrote for IT for Change about social media. It is called Building a Socialist Social Media Commons. Andit is about how to transform the social media landscape so that it is truly democratic, bottom up and egalitarian and environmentally sustainable at a global level.

So right now over the last few years, the antitrust community has proposed a solution for social media that force big social media networks to interoperate with smaller ones. So that smaller networks have a real chance of growing their user bases.

However in their solution. There is a commitment to competitive capitalism and the private ownership of social media networks that pursue profit growth expansion and try to maximize their user bases in a war of all against all for a finite user base in order to maximize revenues and profits.

So I think that the harms that we see in big social media, digital privacy violations and user manipulations as well as a consumerist model built around advertising that threatens the environment – these things are going to remain intact under their model.

I argue in the paper that instead we should take this further and try to build a truly bottom up, community owned and controlled social media ecosystem, one that is free and open source and decentralized. So that we don’t run into these harms. And so that people are in control of their social media experience.

And then I close the article out by discussing some legal solutions. Because it is one thing to have an alternative that exists in the real world that is functional and doing quite well but it is another thing to scale it up. Because the big social media networks already have cornered the market.

So I have a set of legal solutions that I think could be put into place that would actually transform social media into a socialist commons.

In order to make this work obviously we would need a big grassroots movement because you can’t destroy trillion dollar corporations without pushback and attempts to stop it from happening.

SOFÍA MONSALVE SUÁREZ , Secretary General of FIAN International: Big Tech is trying to control all domains essential for life. Food is one of those. In alliance with  Big Food and Agribusiness, Big Tech is a major factor in potentially increasing the corporate capture of our food systems.

But agribusiness is not the only entry point for Big Tech in agriculture. Big Tech is also trying to penetrate and control small scale farming. How is it doing so?

It is providing digital infrastructure to rural areas as well as digital platforms for accessing markets, digital advisory extension services, agri-digital financial services and access to ‘smart farming’ for small scale food producers. Why is this a problem?

Bycontrolling digital infrastructure Big Tech is in a comfortable position to illegitimately appropriate small scale farmer data. Big Tech attempts to organize food production in a manner that will deepen the subordination of the small holder farming interests to global capital.

Capturing peasant and indigenous collective knowledge and monopolizing those rents that can be generated from it is a central piece in these endeavors. Big Tech jeopardizes the rights of peasants and of indigenous peoples. Defending our food sovereignty is a crucial element in today’s struggle against Big Tech.

FRIES: All of the essays in the State of Big Tech compendium can be found online at itforchange.net. The direct link is as follows: projects.itforchange.net/state-of-big-tech/.

As well as the essays mentioned in today’s short, the compendium’s other published titles include:  Rise of the Platform Economy: Implications for Labor and Sustainable Development in Developing Countries, Taming Big Technification? The European Digital Markets Act; Big Tech and Digital Hype Against Covid-19, Can Data Save Lives: The Right to Health in the Digital Era, Web3 and the Metaverse: Which Way for the Web?, Big Tech and the Smartification of Agriculture, Taxing Big Tech: Policy Options for Developing Countries, Changing Dynamics of Labor and Capital

Many thanks to IT for Change for putting this content into the public domain and to all the supporters and contributors to this research project. And thank you for joining us.

Original content in this work by Lynn Fries/GPEnewsdocs is licensed under a Creative Commons Attribution-NonCommercial-NoDerivatives 4.0 International License. Some of the other public domain work(s) that this program incorporates may be licensed separately.